With the advantage of light weight and nice-looking, good thermal conductivity and easy processing into a complex shape, the aluminum alloy is widely used in the heat sink. The aluminum heat sink included three types: the flat and wide comb-shaped or fish-shaped; the round or oval with outer sinks in radial form; dendrites. Their common feature is: the gap between two heat sinks is short, formed a groove with a large depth-to-width ratio; with a big thickness difference, the general heat sink is thin and the root of the base plate is thick. These bring a lot of difficulty to the mould design, manufacturing and production of the heat sink. 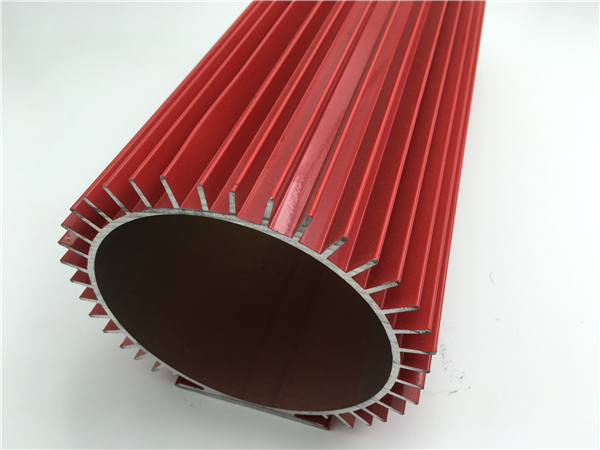 The production of aluminumheat sink is based on the quality of the ingot, the material and design of the mould, the reduction in extrusion pressure, and the extrusion process.

1. The quality requirements of ingots

Ingremouldnts of the ingot should be strictly controlled on the impurity content to ensure the purity of the alloy. In terms of the 6063 alloy, it needs to control the content of Fe, Mg, and Si content. Fe content should be less than 0.2%, Mg and Si content are generally controlled at the lower limit of national standards, 0.45% ~ 0.55% Mg content and 0.25% to 0.35% Si content. The full homogenization process enables the ingot uniform in the organization and performance.

The surface of the ingot should be smooth without segregation or sticky sand. The side surface of the ingot should be flat to avoid the stepped shape or large slop (the inclination should be within 3 mm). When the aluminum heat sink is extruded in the plane mould, if the side surface is step-like or has large sloping without a diversion, the ingot will have a direct touching to the mould. Because of uneven side-surface, the stress concentration is easy to damage the mould teeth, or cause the material difference, resulting in poor plugging or extrusion moulding.

2. The requirements of the mould

Because the aluminum heat sink mould is formed with a lot of slender teeth, in order to withstand a lot of squeeze force, each tooth must have a high strength and toughness. If the performance between each other is very different, those teeth with poor strength or toughness are easy to be broken. Therefore, the quality of mould steel must be reliable, and it is best to use the H13 steel of reliable manufacturers, or the high-quality imported steel. Mould heat treatment is very important -- the vacuum heating quenching with high pressure pure nitrogen quenching can ensure the mould with uniform performance in various parts. After quenching, the mould should have three tempering so that the hardness can be ensured under the premise of HRC48 ~ 52 with sufficient toughness. This is an important condition to prevent the mould from breaking teeth.

In order to prevent the mould teeth broken, the extrusion force should be minimize as possible as it can. The extrusion force relates with the ingot length, the alloy deformation resistance, the ingot state, the degree of deformation and other factors. Therefore, the casting rods of aluminum heat sink extrusion should not be too long, 0.6 ~ 0.85 times of the length of normal cast rod. Especially, in the mould testing and extruding the first cast rod, in order to ensure the successful production of qualified products, it is best to use a shorter cast rod, that is, (0.4 ~ 0.6) times of the length of the normal cast rod.

For the section of aluminum heat sink with complex shapes, in addition to shorten the length of the cast rod, the pure aluminum short cast can be also be used to try the first extrusion. And when the extrusion tests successful, the normal ingot can be used in extrusion production.

The key to aluminum heat sink production is the first mould testing of the extrusion die. As conditions permitted, you can first do a simulation test on the computer to check whether the work belt of the mould design is reasonable, and then try on the extruder. The first mould test is very important, the operator need to press the main plunger on the pressure below 8MPa slowly forward, and it is best to use a flashlight to take care of the mould exit. When the every heat sink of extrusion mould is evenly extruded with mould hole, the pressure can be increased gradually in increasing speed. After the successful mould test is finished, the continuous extrusion should pay attention to control the extrusion speed, smoothly operating. The heating temperature of the mould should be close to the ingot temperature. If the temperature difference is too large, due to the slow pressure adding on the extrusion, the metal temperature will drop to cause blocking or uneven flow rate.

In addition to the above factors, the extrusion technology of aluminum heat sink is also related with the extruder's ability and level, the rear automation equipment, the workers operating skills, etc. Different sections of aluminum heat sink should be based on its characteristics to take the appropriate measures.